The mayor of the council carries out our civic ceremonial duties and chairs meetings of the full council. The mayor is elected annually by the council.

The Mayor of Chesterfield for 2022/23, Councillor Tony Rogers 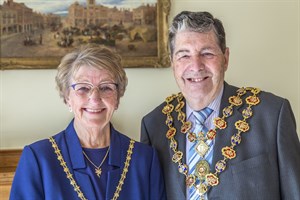 Tony was born in 1938 at Wheal Honey Farm near Liskeard in Cornwall. At the age of 12 his family moved to a fishing village called Hope Cove near Kingsbridge in Devon. After leaving school he worked as an agricultural merchant at South Devon Farmers Limited, where he trained to be a manager and sold farming goods. At the age of 17, Tony was called up to serve in the British Army for two years.

Upon return from his national service, he set up his own company, Tony Rogers Agricultural Ltd, selling animal feed, and went on to manage Hotel Kildare, a family business, in Kingsbridge for 15 years.

Tony began his political career in 1963 and has stood as a candidate in 36 elections since that time. Tony was elected as the Mayor of Kingsbridge for four consecutive years, and his beloved mother was his Mayoress during these years.

Tony married and had three children, Scott, Sian and Jack. In 1977 he met Sharon, who he married in 1979, and they went on to have two children, Andrew and Amy.

Tony stood in the 1986 general election as a candidate for Chesterfield against Tony Benn MP and, although he was not elected as MP, Tony did move to Chesterfield in 1990 and began his local government career here.

Tony was elected as Liberal Democrat councillor for Moor ward and has served the community through several terms of office for over 11 years. Tony has dedicated a lot of his time to being on the board of trustees and the chairman of Hope Springs recovery centre, which was a day centre for residents recovering from alcohol and drug addiction and the associated mental health issues.

Tony and Sharon now have eight grandchildren who they love to spend time with, and a rescue dog, Lottie, who came from Bulgaria to become part of the family.

Tony is proud to be representing the residents of the borough of Chesterfield and would like to thank you for your continued support; he hopes to meet as many of you as possible during his Mayoral term of office.

Sharon was born in Mt Clements, Michigan, USA in 1951 to an American father and a British mother. She moved to the UK with her family in 1953, travelling in style on the Queen Mary.

Sharon lived and was educated in Nottingham and after leaving school she followed a career in nursing, specialising in paediatric nursing and children’s intensive care, eventually becoming a Senior Sister. At the age of 21, Sharon was the youngest doubly qualified sister in the UK.

In 1977 she met Tony and moved to Kingsbridge to help him to run the family hotel, where they married and started their family.

Whilst living in Kingsbridge, Sharon helped to run the local playschool and was a member of the Parent Teacher Association. Her work with children continued when the family moved to Chesterfield where she went back into nursing until she retired.

Retirement gave Sharon the opportunity to take on the job of manager at Hope Springs recovery centre. Sharon was passionate about her work at the centre, becoming a trustee and remaining there for almost six years until it closed in March 2019. Sharon is currently an active board member for The Volunteer Centre in Chesterfield.

The Mayor’s charity is Bluebell Wood Children's Hospice and the Alzheimer's Society.